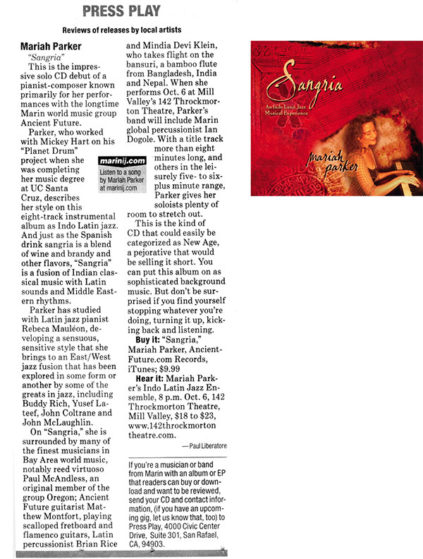 This is the impressive solo CD debut of a pianist-composer known primarily for her performances with the longtime Marin world music group Ancient Future.

Parker, who worked with Mickey Hart on his “Planet Drum” project when she was completing her music degree at UC Santa Cruz, describes her style on this eight-track instrumental album as Indo Latin jazz. And just as the Spanish drink sangria is a blend of wine and brandy and other flavors, “Sangria” is a fusion of Indian classical music with Latin sounds and Middle Eastern rhythms.

Parker has studied with Latin jazz pianist Rebeca Mauléon, developing a sensuous, sensitive style that she brings to an East/West jazz fusion that has been explored in some form or another by some of the greats in jazz, including Buddy Rich, Yusef Lateef, John Coltrane and John McLaughlin.

On “Sangria,” she is surrounded by many of the finest musicians in Bay Area world music, notably reed virtuoso Paul McAndless, an original member of the group Oregon; Ancient Future guitarist Matthew Montfort, playing scalloped fretboard and flamenco guitars, Latin percussionist Brian Rice and Mindia Devi Klein, who takes flight on the bansuri, a bamboo flute from Bangladesh, India and Nepal. When she performs Oct. 6 at Mill Valley’s 142 Throckmorton Theatre, Parker’s band will include Marin global percussionist Ian Dogole. With a title track more than eight minutes long, and others in the leisurely five- to six-plus minute range, Parker gives her soloists plenty of room to stretch out.

This is the kind of CD that could easily be categorized as New Age, a pejorative that would be selling it short. You can put this album on as sophisticated background music. But don’t be surprised if you find yourself stopping whatever you’re doing, turning it up, kicking back and listening.

If you’re a musician or band from Marin with an album or EP that readers can buy or download and want to be reviewed, send your CD and contact information, (if you have an upcoming gig, let us know that, too) to Press Play, 4000 Civic Center Drive, Suite 301, San Rafael, CA, 94903.