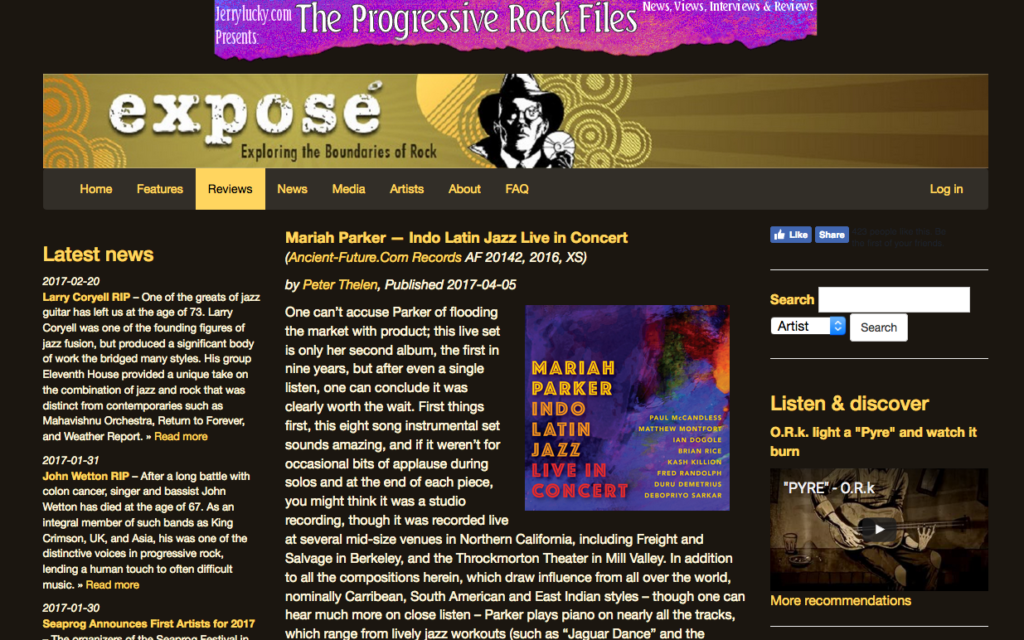 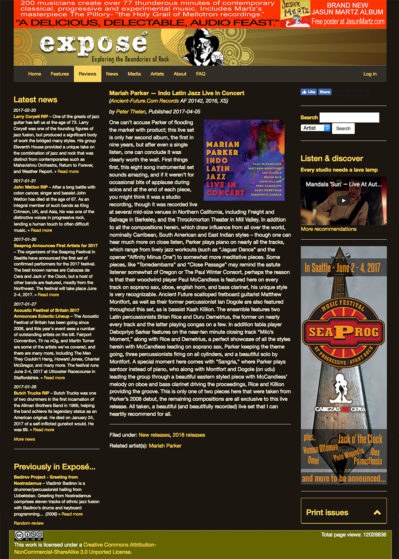 One can’t accuse Parker of flooding the market with product; this live set is only her second album, the first in nine years, but after even a single listen, one can conclude it was clearly worth the wait. First things first, this eight song instrumental set sounds amazing, and if it weren’t for occasional bits of applause during solos and at the end of each piece, you might think it was a studio recording, though it was recorded live at several mid-size venues in Northern California, including Freight and Salvage in Berkeley, and the Throckmorton Theater in Mill Valley. In addition to all the compositions herein, which draw influence from all over the world, nominally Carribean, South American and East Indian styles – though one can hear much more on close listen – Parker plays piano on nearly all the tracks, which range from lively jazz workouts (such as “Jaguar Dance” and the opener “Affinity Minus One”) to somewhat more meditative pieces. Some pieces, like “Torredembarra” and “Close Passage” may remind the astute listener somewhat of Oregon or The Paul Winter Consort, perhaps beause their woodwind player, Paul McCandless, is featured here on every track on soprano sax, oboe, english horn, and bass clarinet, and his unique style is very recognizable. Ancient Future scalloped fretboard guitarist Matthew Montfort, as well as their former percussionist Ian Dogole are also featured throughout this set, as is bassist Kash Killion. The ensemble features two Latin percussionists, Brian Rice and Duru Demetrius, the former on nearly every track and the latter playing congas on a few. In addition tabla player Debopriyo Sarkar features on the near-ten minute closing track “Milo’s Moment,” along with Rice and Demetrius, a perfect showcase of all the styles herein, with McCandless leading on soprano sax, Parker keeping the theme going, three percussionists firing on all cylinders, and a beautiful solo by Montfort. A special moment here comes with “Sangria,” where Parker plays santoor instead of piano, along with Montfort and Dogole (on udu) leading the group through a beautiful eastern styled piece with McCandless’ melody on oboe and bass clarinet driving the proceedings, Rice and Killion providing the groove. This is only one of two pieces here that were taken from Parker’s 2008 debut – the remaining compositions are all exclusive to this live release. All taken, a beautiful (and beautifully recorded) live set that I can heartily recommend for all.