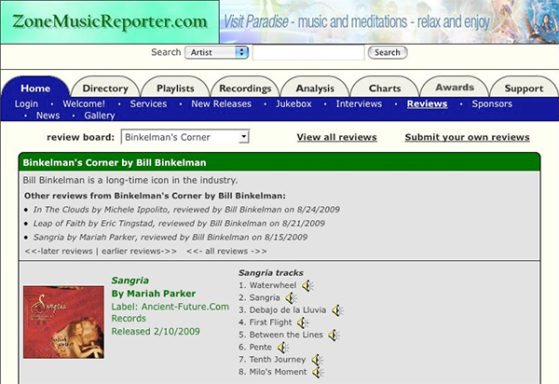 Pianist Mariah Parker cooks up a heady stew of jazz/world fusion on Sangria, a spicy intoxicating mixture of straight-up jazz inflected with ’70s era fusion (think original Return to Forever, circa Light as a Feather) and global influences from both South America and India. The CD cover reads “An Indo Latin Jazz Musical Experience” to which I would add the words “..that kicks all kinds of ass!” Anchored by (but not dominated or overwhelmed by) Parker’s great work on the ivories, this is as exuberant a recording as I’ve heard in the last year, bursting with inventive jazz phrasing by all the players as well as spiced up with plenty of exotic flavors from the rich musical heritages of both Latin America and India.

Things kick off in high style with the rambunctious Waterwheel and comparisons to both Return to Forever and, to a lesser degree, seminal word fusion band Oregon immediately spring to mind. Mindia Devi Klein’s flitting bansuri flute teases and pleases while Parker displays adroit technique and artistry. Matthew Montfort’s scalloped fretboard guitar, Kash Killion’s bass, Debopriyo Sarkar’s tabla and Duru Demetrius’ percussion all contribute to a light-hearted romp filled with a sheer love of musical expression. Next, the title track shifts gear as it starts off with Parker’s santur (Indian hammer dulcimer) and Montfort’s sexy flamenco guitar as a duet, eventually incorporating Killion’s bass, cello and sarangi and tabla by Anuradha Pal. Spicy and mysterious, the music is alluring and suffused with a perfume-like appeal…you are seduced by both the haunting melody and frenetic rhythms.

A more straight-forward jazz approach surfaces on Debajo De La Lluvia and Parker’s paino playing anchors the cut strongly, providing both lead and accompaniment to captivate the listener, somehow melding the upfront jazz elements with the spicier Latin flavorings. Montfort also steps out front with a tasty solo which showcases his mastery of that unique guitar of his! The next song, First Flight, bursts with uptempo urgency and energy, courtesy of Paul McCandless’ soprano sax, Montfort’s guitar and Parker’s piano, all of them lit up by the fire from Killion’s bass and Pal’s ridiculously fast tabla playing.

As if sensing the need for a break in the forward momentum generated by the energy expelled so far, Between the Lines is the only slow cut on the CD. A Latin-flavored (via Montfort’s flamenco guitar) track which also features Parker on piano and Killion on cello, the song is low key compared to the rest of the CD but is still a far cry from “quiet” although Parker’s occasional solo runs on her instrument lend an air of somberness and even melancholy to the proceedings, as does Killion’s expressive cello.

The other three tracks all explore variations of the mixture of jazz with world beat music revealed on the earlier four songs. Unlike many world fusion recordings, Sangria is, first and foremost, slanted to appeal more to the jazz hound more than the world beat music aficionado, although owing to the pronounced presence of tabla and bansuri and Montfort’s flamenco guitar, global influences still abound at times. However, I’ll stick with my comparisons to Return to Forever and Oregon (or even the original incarnation of The Winter Consort). More than anything else, Sangria celebrates how artists can crisscross geographic boundaries, revealing the global appeal of hybrid genres that embrace the universal concept of music which energizes, invigorates and excites the listener. Beware – if you play this while working around the house, you probably won’t get a lot of work done, although you’ll enjoy whatever you accomplish and you may also teach yourself some new dance moves if you have a broom handy!
Rating: Very Good +