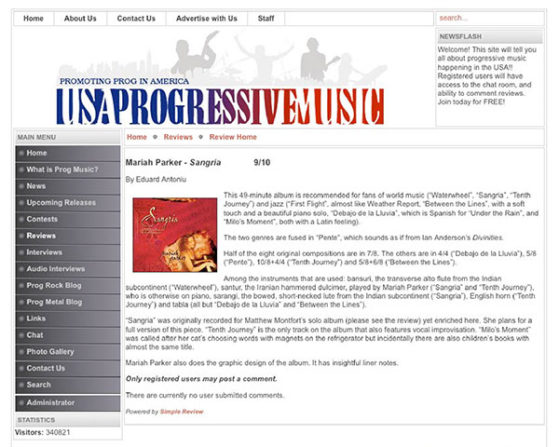 This 49-minute album is recommended for fans of world music (“Waterwheel”, “Sangria”, “Tenth Journey”) and jazz (“First Flight”, almost like Weather Report, “Between the Lines”, with a soft touch and a beautiful piano solo, “Debajo de la Lluvia”, which is Spanish for “Under the Rain”, and “Milo’s Moment”, both with a Latin feeling).

The two genres are fused in “Pente”, which sounds as if from Ian Anderson’s Divinities.

Among the instruments that are used: bansuri, the transverse alto flute from the Indian subcontinent (“Waterwheel”), santur, the Iranian hammered dulcimer, played by Mariah Parker (“Sangria” and “Tenth Journey”), who is otherwise on piano, sarangi, the bowed, short-necked lute from the Indian subcontinent (“Sangria”), English horn (“Tenth Journey”) and tabla (all but “Debajo de la Lluvia” and “Between the Lines”).