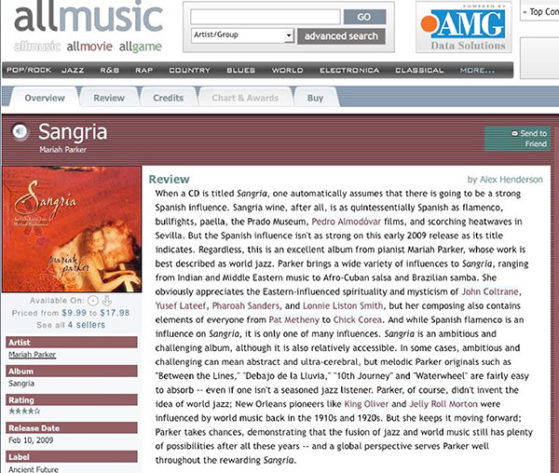 hen a CD is titled Sangria, one automatically assumes that there is going to be a strong Spanish influence. Sangria wine, after all, is as quintessentially Spanish as flamenco, bullfights, paella, the Prado Museum, Pedro Almodóvar films, and scorching heatwaves in Sevilla. But the Spanish influence isn’t as strong on this early 2009 release as its title indicates. Regardless, this is an excellent album from pianist Mariah Parker, whose work is best described as world jazz. Parker brings a wide variety of influences to Sangria, ranging from Indian and Middle Eastern music to Afro-Cuban salsa and Brazilian samba. She obviously appreciates the Eastern-influenced spirituality and mysticism of John Coltrane, Yusef Lateef, Pharoah Sanders, and Lonnie Liston Smith, but her composing also contains elements of everyone from Pat Metheny to Chick Corea. And while Spanish flamenco is an influence on Sangria, it is only one of many influences. Sangria is an ambitious and challenging album, although it is also relatively accessible. In some cases, ambitious and challenging can mean abstract and ultra-cerebral, but melodic Parker originals such as “Between the Lines,” “Debajo de la Lluvia,” “10th Journey” and “Waterwheel” are fairly easy to absorb — even if one isn’t a seasoned jazz listener.

Parker, of course, didn’t invent the idea of world jazz; New Orleans pioneers like King Oliver and Jelly Roll Morton were influenced by world music back in the 1910s and 1920s. But she keeps it moving forward; Parker takes chances, demonstrating that the fusion of jazz and world music still has plenty of possibilities after all these years — and a global perspective serves Parker well throughout the rewarding Sangria.