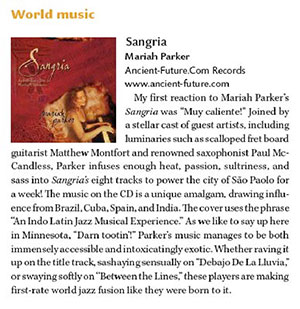 My first reaction to Mariah Parker’s Sangria was “Muy caliente!” Joined by a stellar cast of guest artists, including luminaries such as scalloped fret board guitarist Matthew Montfort and renowned saxophonist Paul Mc-Candless, Parker infuses enough heat, passion, sultriness, and sass into Sangria’s eight tracks to power the city of São Paolo for a week! The music on the CD is a unique amalgam, drawing influence from Brazil, Cuba, Spain, and India. The cover uses the phrase “An Indo Latin Jazz Musical Experience.” As we like to say up here in Minnesota, “Darn tootin’!” Parker’s music manages to be both immensely accessible and intoxicatingly exotic. Whether raving it up on the title track, sashaying sensually on “Debajo De La Lluvia,” or swaying softly on “Between the Lines,” these players are making first-rate world jazz fusion like they were born to it.