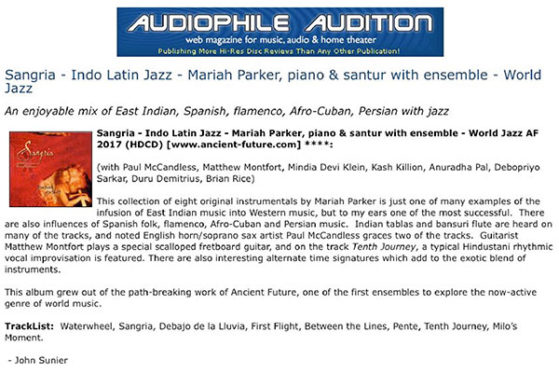 This collection of eight original instrumentals by Mariah Parker is just one of many examples of the infusion of East Indian music into Western music, but to my ears one of the most successful.  There are also influences of Spanish folk, flamenco, Afro-Cuban and Persian music.  Indian tablas and bansuri flute are heard on many of the tracks, and noted English horn/soprano sax artist Paul McCandless graces two of the tracks.  Guitarist Matthew Montfort plays a special scalloped fretboard guitar, and on the track Tenth Journey, a typical Hindustani rhythmic vocal improvisation is featured. There are also interesting alternate time signatures which add to the exotic blend of instruments.

This album grew out of the path-breaking work of Ancient Future, one of the first ensembles to explore the now-active genre of world music.