The Sounding Board, Zone Music Reporter 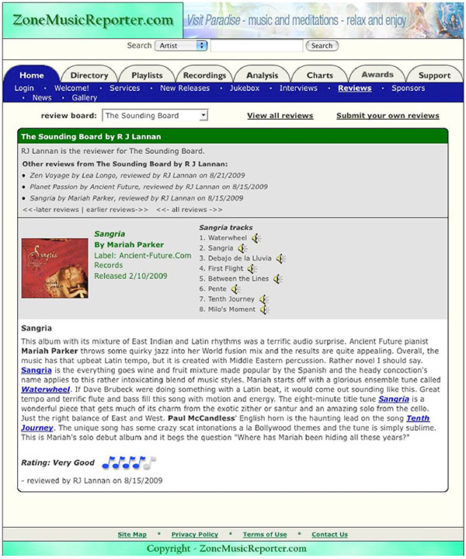 This album with its mixture of East Indian and Latin rhythms was a terrific audio surprise. Ancient Future pianist Mariah Parker throws some quirky jazz into her World fusion mix and the results are quite appealing. Overall, the music has that upbeat Latin tempo, but it is created with Middle Eastern percussion. Rather novel I should say. Sangria is the everything goes wine and fruit mixture made popular by the Spanish and the heady concoction’s name applies to this rather intoxicating blend of music styles. Mariah starts off with a glorious ensemble tune called Waterwheel. If Dave Brubeck were doing something with a Latin beat, it would come out sounding like this. Great tempo and terrific flute and bass fill this song with motion and energy. The eight-minute title tune Sangria is a wonderful piece that gets much of its charm from the exotic zither or santur and an amazing solo from the cello. Just the right balance of East and West. Paul McCandless’ English horn is the haunting lead on the song Tenth Journey. The unique song has some crazy scat intonations a la Bollywood themes and the tune is simply sublime. This is Mariah’s solo debut album and it begs the question “Where has Mariah been hiding all these years?”