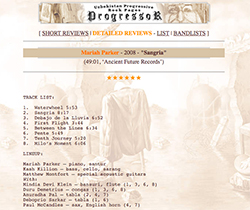 Prolusion. As the press kit of this release says, Mariah PARKER is an American composer and multi-instrumentalist who has degree in music at UC Santa Cruz and has also studied with jazz great Art Lande and Latin Jazz pianist extraordinaire Rebeca Mauleon. The document also suggests she is currently a member of Ancient Future, but has her own ‘Indo Latin Jazz’ ensemble as well. However, it is unclear from it whether “Sangria” is Mariah’s first solo album. In any event, although featuring two musicians whose works aren’t a closed book for me, namely Matthew Montfort (the founding member of the aforesaid group) and Paul McCandles (of Oregon fame), it marks my first acquaintance with her creative activity. Finally, I think it might be necessary to explain the nature of some of the instruments that are featured in the Lineup section above and of which I myself learned only thanks to the Internet: “Santur” is a dulcimer, “bansuri” is a transverse flute and “sarangi” is a bowed lute, the first of these hailing from Iran, while both the latter are from India.

Analysis. As you can see above, “Sangria” features three full members (two of whom have biblical names) and several side participants, the only one of the disc’s eight tracks that the trio performs exclusively on its own, Between the Lines, being a standout in a way. While as metrically complex as all the others, it is nevertheless vastly different from any of those and is a mellow, romantically-introspective piece for piano, flamenco guitar and cello. The music is basically quasi symphonic – for the most part, to be more precise, as a couple of times Maria begins improvising in almost an overtly jazz manner. Kash Killion’s cello has a kind of Indian quality to its sound which automatically makes me think of the artist whose first name is compiled of two others: Lakshmi which is one of the names of Krishna’s eternal wife, Radharani, and Narayana who is one of the – countless – incarnations of Krishna Himself, and the last one, Subramaniam, is, well, equally familiar to most of you dear readers. Unlike the title piece (another track where Matthew also avails himself of the flamenco guitar, otherwise only playing the scalloped fretboard guitar), on this particular one I didn’t hear any corresponding motifs. The other seven compositions are much denser in structure, all of them featuring bass parts as well as either congas or tabla (or even both these ethnic percussion instruments) and so have a sort of bottom end – just don’t view it from a rock perspective; more than half of these additionally stand out for their rich flute patterns. Mariah has her own, quite original, approach to World Fusion, which finds its reflection in both composition and arrangement, but particularly so in her piano passages which I wouldn’t dare to compare with anyone else’s.

The overall style is along the line of such world-class acoustic bands of the genre as Oregon, Shakti and, of course, Ancient Future (think “Asian Fusion” rather than “Planet Passion”, as the latter outing has a lot of vocals) whose influence is especially obvious on Waterwheel, the title track and Tenth Journey – where we in all cases deal with a really many-sided World Fusion, with quite a few genuinely jazz rock, symphonic and generally speaking, oriental Classical music-related intonations in addition. The primary or rather distinct ‘world’ influences are Indian, Spanish and Arabic in the first two cases and Far-Eastern and West-European on the latter piece, though the cor anglais, courtesy of Paul McCandles, at times evokes Celtic and even Baroque music. Each of these reveals few retreading of previously paved paths and no unison leads at all. Instead, there are plenty of differently vectored passages and solos which almost ceaselessly cross each other, creating complex, polyphonic, yet always amazingly cohesive harmonies in their sonic constructions. While still retaining quite a few of the features that typify the last three described compositions, the remaining ones, Debajo de la Lluvia, First Flight, Pente and Milo’s Moment, are overall much more upbeat and rhythmically pronounced pieces and are, to my ears, closer to acoustic Jazz Rock flavored with various mostly indistinct ethnic elements than to World Fusion in its, say, academic appearance. Only the closing track or, to be more precise, one of its five or six thematic storylines, instantly arouses associations with any particular land (here Spain, only thanks to Mariah this time). Okay, each of these can in some ways be viewed as a conga-driven piece, but those instruments are widespread in most, if not all, of the Middle Eastern, South Asian and North African countries, so the motifs they bring to mind can only be labeled in a general way: as oriental, besides which they only play a secondary role in the arrangements. Oh my God, what am I talking about? All these details are inessential. What’s really significant is that the album sounds original and interesting throughout, in whichever style the musicians play.

Conclusion. Compared to most of the other releases I’ve heard this year (most of which, in turn, are rehashes of conventional Progressive Rock of the past), Mariah Parker’s “Sangria” sounds really fresh and compelling, let alone different, standing out for its brilliant musicianship as well as highly resourceful ensemble playing. At once quite deep and beautiful, the recording also has an excellent sonic quality that highlights all the overtones that, well, it’s so rich in. No one with interest in acoustic progressive music should miss “Sangria.”